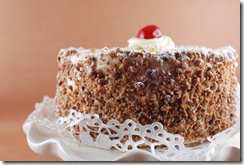 Vancouverites familiar with the legendary Diplomat Cake from Notte’s Bon Ton Pastry and Confectionery likely enjoyed their first bite of this multi-layered, rum-soaked sponge and puff pastry cake at a birthday party. 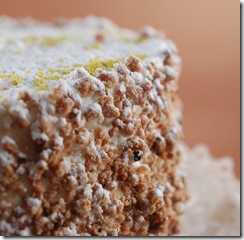 A birthday feels so much more special when you have a Diplomat Cake. The recipe is a well-guarded secret but as you can see, the components are clearly apparent: layers of shatteringly crisp puff pastry, heavenly smooth French buttercream, rum-soaked sponge layers and yet more buttercream. The maraschino cherry on top and the nubbly nutty sprinkles on the side of the cake are signature as is the whisper of ground pistachio sprinkled like fairy dust on the surface of the Diplomat. 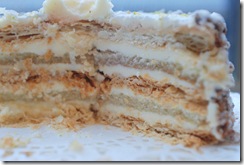 It is pure buttercream bliss. The textural contrasts are wonderful and suitably memorable for birthdays. I care not to try to replicate this particular cake because the bakery has obviously honed the recipe over the many years they have been in operation. It has been an institution since 1926. My 7 inch cake was $14 and change. 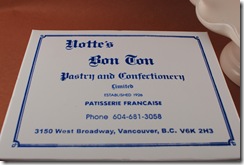 My birthday isn’t until Monday, but I didn’t think there was any point in having my birthday cake on a work day when I was way too busy shuttling Bebe to karate class after school. I wanted to put my feet up and savour every bite. Bebe wanted to surprise me, but knew how particular I was about purchased cakes. She asked me what I wanted. I said, “Either chocolate layered with marshmallow frosting or a Diplomat”. 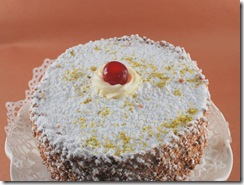 We headed over to the bakery after having Dim Sum at Sun Sui Wah and Bebe promised that instead, she’d surprise me on my actual birthday with something else…I can’t wait!
In the bakery’s window front display, there are a multitude of trays of petit fours. You can find a mini version of the Diplomat among a bevy of multi-coloured, nut-encrusted, maraschino-bejewelled pastries. There are so many to choose from that it is quite overwhelming—almost. The bakery keeps a supply of Diplomat Cakes as well as other cakes on hand and we didn’t have to pre-order one. I imagine though that if you had an important party, you’d want to pre-order just in case they ran out on a busy day.
I wanted to try the Chocolate Diplomat but didn’t want to be disappointed so I got the mini version instead to try out. Also interesting was the Mexican, so I bought a mini version of it as well. The rest were as usual, chosen for their chocolatey-come-thither-appeal. 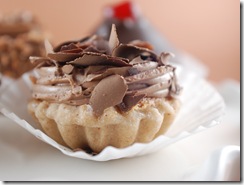 Above is the Mexican. It’s so cute. 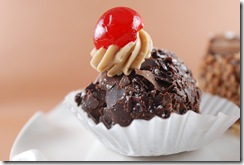 This one is like a trifle. It has chopped up maraschino cherries, which Bebe loves. That, and the cherry on top sure helps. 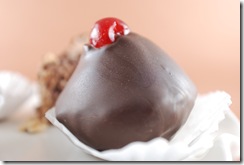 This is called a Chocolate Progressive. I think there’s ground almonds inside. 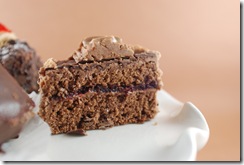 The above petit four is a slice of Chocolate Diplomat. I didn’t think it would look like that and instead thought there would be puff pastry layers. That looks like some sort of raspberry filling. 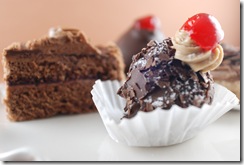 i don't wonder why my mouth watering ><

Many Happy Birthday wishes to you! Hope you enjoy your surprise, can't wait the hear what it is. mmmm Diplomat cake...it's been too long....

Happy Birthday! This cake looks delicious...will keep in mind next time in Vancouver :-)

Hello CakeBrain -
I came across your blog looking for examples of snowflake cookies - and found your post of 2007. Your decorating skills are amazing. You should check out "sweetopia" for inspiration as well.

I assumed (wrongly) that anyone with such an amazing passion for cooking and blogging must be a yank, but much to my surprise, I found a fellow Canadian!

So cheers to you, neighbour, fellow, blogger, and foodie.

If you like wine (what foodie wouldn't at least try) I also have a blog winesplash.blogspot.com I am new at blogging, but hope with practice will improve.

That cake looks to die for.
Maybe not recommended to drive afterwards! lol.

I love your blog.
I can't find where I can follow it with blogspot as I have a blog too.
I'm just gettiing started. Without people reading it I don't get very motivated lol.www.applelicioussweets.blogspot.com

Thanks everyone for the birthday wishes! I had a good one! I even got a special present that I think is so awesome! A Kindle!

Apple,
I checked out your blog! Great job with the cakes! I couldn't comment on any of your posts for some reason...maybe check the settings and enable comments if you want people to leave comments. I think your chocolate cake looks amazing!
If you want to add my blog to your list, go to your Dashboard, select Layout, Page Elements and add my blog's url link to your BlogList. Happy Blogging!

Oh! Oh! Advanced Happy Birthday! I wish I could partake in your many sweet treats! :)

that looks so good . chocolate is my best friend and always will be.I just wish there was a redipe fo the cake.;)

Happy Belated Birthday wishes to you Cake Brain...I haven't visited for a while,naughty moi, but I LOVE the look and sound of this cake.....wish I had a slice right now!!

I was wondering if you knew what the nutritional information is?

Juice,
Usually, I don't think about the nutritional information when I'm eating cake! You'd have to contact the store for that.