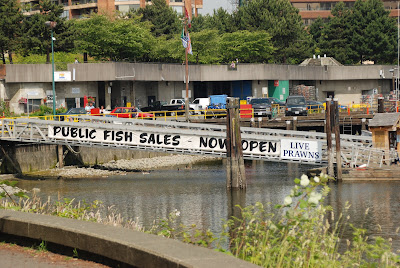 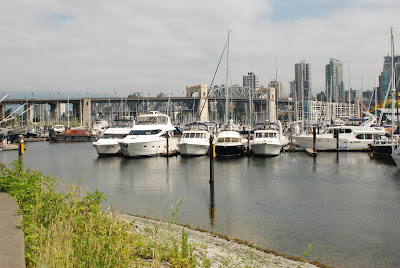 there's the Burrard Street bridge in the background


I can feel that summer's here in Vancouver. I had a fantastic meal of local Spot Prawns twice already in the past week. Yum!

School's almost out; I'm finished all my marking and everything's winding down. Whoopee!

Today was such a fantastic day. It was warm and sunny but there was a definite strong sea breeze running through the city. We took the kids and headed to Granville Island public market. I wanted to see if any local Spot Prawns had arrived yet. Unfortunately, the sign on the dock said that the boats wouldn't be in until 1pm and we were there at 10 a.m.

It was nice looking around the docks. There was fresh wild sockeye salmon, and a couple of tuna boats were docked too. 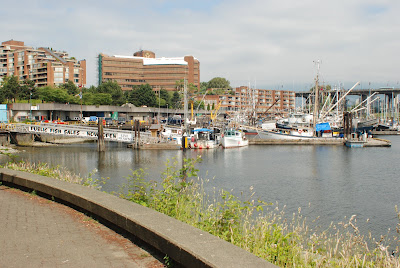 walk along the seawall...it's lovely!

Undeterred by the lack of local prawns at the dock, we headed off towards the Kids Market where I spent way too much money on scrapbooking supplies again at the I'm Impressed store. Then, we had a bite to eat at Sammy J Peppers since Bebe proclaimed she was starving. I wasn't wanting to fight the seagulls for a spot on the dock to eat so we opted for the restaurant setting on their patio. It was great because they're decked out for kids. They had crayons, paper placemats that they could colour and they even had a family room. I had no idea since I had never gone to this restaurant before. The meal was a success and the food was good. No one had any complaints...plus we had a great dockside view of the boats moored nearby. 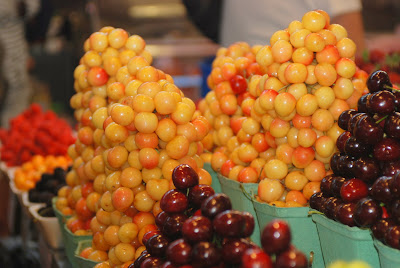 fresh produce in the public market: Rainier and Byng cherries

We went to the public market to buy some food for the coming week. It's so great seeing all the fresh fish and produce and it inspires you to cook fantastic things. 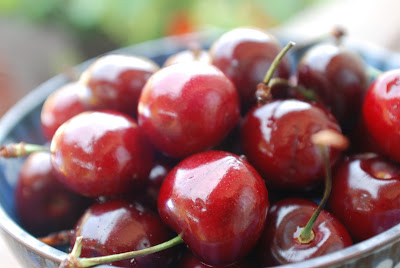 I'm a sucker for cherries and there's nothing like sitting on your deck in the summer with a bowl full of 'em. 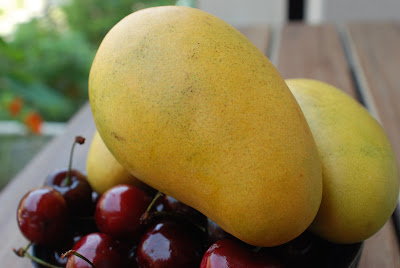 The girls never leave the public market without a bag full of donut holes from Lee's Donuts. Sometimes if you're lucky, you can see them through the big window out front making them fresh. We always buy 1/2 a dozen each of glazed plain and chocolate. mmmm! By the time we get home, most of the holes are gone! and I haven't even touched them yet! 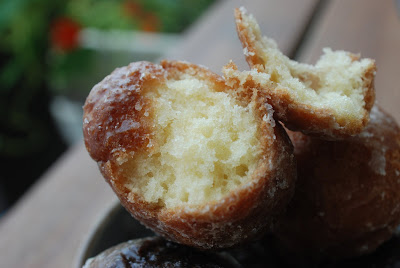 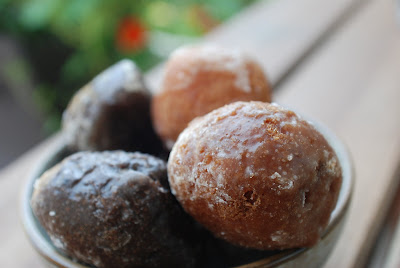 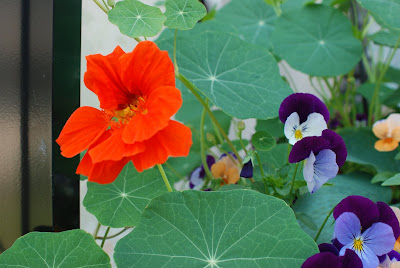 Here's a pic of the huge planter full of flowers on my deck. The Nasturtiums are humungous! 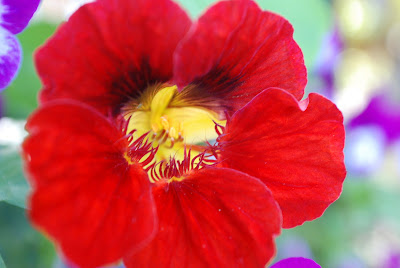 On another note, the other day I received some samples of black sesame and peanut mix from a HK company that makes these dessert mixes. I received 2 boxes of each flavour so that I could test the products and create some recipes.

My mom took one look at the boxes and ripped one open, exclaiming that she loved the black sesame dessert soup and wanted a bowl right now. She just added hot water and then sat back and slurped one package down. Each box comes with 4 packages that makes 4 bowls.

I decided to make a chiffon cake with sesame swirl. Let's just say it didn't turn out the way I wanted it to. I think a cake is too unpredictable for this product because of the other added ingredients...sugar and starches etc. I wanted to give it a try anyway. In general, I prefer freshly ground black sesame that I grind myself. I've never used prepared dessert soup mix for baking. The other ingredients are proving to be a bit difficult so far. So, I'll try again in a few days. I haven't had a cake flop in ages and it was quite deflating! literally! I kind of had the feeling it wouldn't turn out but I crossed my fingers and tried it anyway. I'll be trying something less temperamental in a few days. I am not deterred! 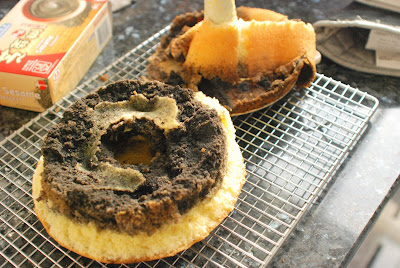 this test cake was garbaged because it was such a flop! too dense and not too pretty either!

Oh, that sounds *almost* like the perfect day! Sorry about the once in a lifetime cakeflop! These convenience/ pre-prepared foods can be so unpredictable!

I absolutely LOVE the purple/blue flower in the corner of your top picture. Great picture. Any idea about what they are called?

Avanika,
I believe the purple flowers you are referring to are called "Johnny Jump Ups"...a type of violet (viola cornuta). They can be called pansy violet too. I think that they're edible too. I'd personally like to crystallize them!

This has got to be the most perfect day EVER!!!! The photos are snappy and depicts the very fine day it was.

How the heck do those towers of cherries stay up? The flowers look great. Too bad about the experimental cakes. I occasionally experience those, when I try adding 'interesting' ingredients :D

Y,
You won't believe it, but the cherry towers stay up on their own because the vendors painstakingly arrange them that way! They take pride in their displays! It's so refreshing to hear that such an experienced and awesome baker like you have had experimental flops too!

Too bad about the cake. I love black sesame dessert soup too, though I find most instant mixes too bland. I wonder if the sesame will work in an ice cream...