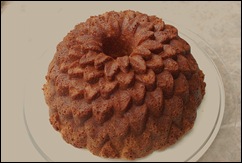 To heck with editing pics in Blogger. It’s a pain. I still haven’t figured out why I can’t move pics around my post by right-clicking and dragging anymore. So I’m giving this Windows Live Writer a go today to see if it’s any easier. I am also trying out Windows Live Photo today for the first to see if it’s easier than Picasa. It seems to have more features and it’s quite easy to use. 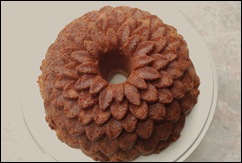 The other day, while browsing around for bundt pans at the Cookshop in City Square, I saw these cool Nordicware pans. The one I chose was the 10 cup Chrysanthemum pan. 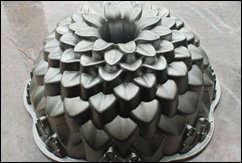 The pattern is intricate and the pan is hefty. I like! 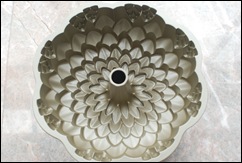 The “petals” in the pattern create a lot of CRUST, and as you know from my sidebar’s ongoing “Who Love the Crusties” poll, a humongous majority of people are into the crusties and covet the brown bits. So this pan’s for you. 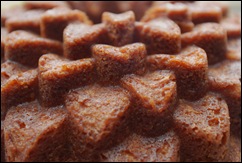 I chose a pound cake recipe from one of 5 new cookbooks I purchased recently. I really ought to take some pics of my bookshelf. It’s bursting with way too many fantastic cookbooks. I found this winner from Bakewise, by Shirley Corriher. The book is hugely thick but I soon found out that most of the pages were filled with “The Math” and explanations of formulas. Much of the explanations are redundant (extracts are repeated throughout the book). I could do with a lot less of the repetition and instead with more stories, recipes and illustrations. Despite the redundancies, so far I’m on board with Corriher’s excellent and in-depth knowledge. What’s important to me is whether the recipe works…and can be duplicated by the home baker. 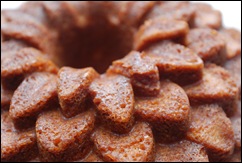 I can honestly say that this is the best pound cake recipe I’ve ever baked. The staff at work concur when I brought them some leftovers and I received rave reviews. The crust was amazing. The interior crumb was moist. It was everything a pound cake should be. And more! 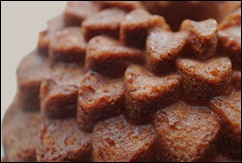 On the first day, fresh from the oven, the pound cake had a nutty aroma and flavour profile. I practically inhaled a quarter of the cake on my own and had to go on the treadmill and run for 90 minutes to alleviate my guilt. On the following day, the pound cake was just as moist and the crust was still crispy and delectably crunchy and crumbly. It was fabulous. 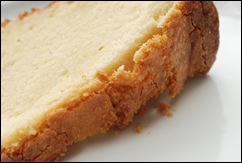 The only problem I encountered with the recipe was that it called for a 12 cup bundt pan. None are to be found nowadays in cookware stores in Canada. The staff at the Cookshop said they stopped making those a while ago. People use 10-cup bundt pans according to them. The store only carried 10-cup bundt pans but I know I could have used my angel food cake pan. That would have been boring though. So I bought the cute chrysanthemum pan. 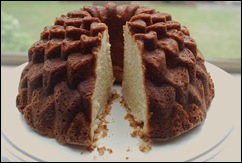 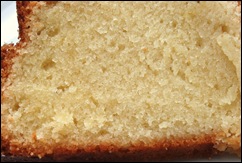 btw, posting through Windows Live Writer--so far-- is easier than blogger. I like it. I’m going to keep using it until I find something better. This is so user-friendly I don’t know why I didn’t do this sooner! I guess I didn’t have problems before and I tend not to fix things unless they’re broke! 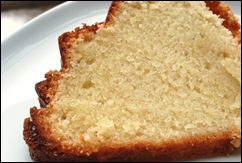 The most intriguing element to Corriher’s pound cake recipe was the addition of whipping cream beaten to the soft peak stage. What it adds to the cake is moistness and a dimension of nutty butteriness. She adds this whipping cream element to some of her other cakes too and I have a feeling those recipes will be winners as well. I’m going to try one of her other recipes for Bebe’s 6th birthday cake. No, I’m not going to outdo myself like I did last year with the Ariel Castle Cake. I don’t think I can top that. I’m just going to go girlie-girl and do a simple cake with flowers. She wants chocolate of course. I’m thinking white frosting. Maybe a really tall cake…taller than it is wide! 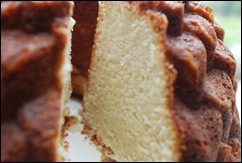 from BakeWise: The Hows and Whys of Successful Baking, by Shirley O. Corriher

*NB: Cakebrain’s Chrysanthemum Bundt Pound Cake was made with a 10-cup Nordicware bundt pan sprayed with Pam. I poured in enough batter to reach about 1 1/2 inches from the rim and poured the remaining batter in a small 2-cup loaf pan. I adjusted baking time for the loaf pan to 50 minutes and the bundt for 65 minutes. I didn’t use a stone in my oven. My baking times were slightly longer than called for in the recipe as the tops still jiggled slightly.

Ever since I read that recipe on Bakewise I've been wanting to try it as well. Looks awesome! But what wouldn't look awesome in that gorgeous pan?!

Wow! That is one rich cake with all the butter and the cream. Maybe one day when I'm baking for a crowd I will make this.

I love the pan, and the recipe sounds very interesting! And I love the castle cake too!

Oh I'm all for more crust! Very very interesting recipe too, with that addition of whipped cream! I'm intrigued enough to want to try it.

The cake design is beutiful but I love the richness even more! What a pound cake to make, eat and remember!

The pan is absolutely stunning, where id you get it? I'd love to own such a fabulous pan.


The Pound Cake, I bet.. well heck, it looks DELISH, I second the richness too.

The pound cake looks amazingly delish! I think I could inhale a quarter of it in one breath.

I love Nordicware bakeware. I have the rose pan and some other of their pans. The chrysanthemum design is gorgeous! Just one question: Was it easy to wash? Sometimes when I think I've cleaned every crevice, I find a little bit of crust in a couple of grooves - aargh!

Yeah, Nordicware is awesome-- if only it wasn't so expensive here and too bulky/heavy to bring from the States! Ha ha ha :) I always have to have a problem. I LOVE the pattern. My only concern would be if you have an opaque glaze, it doesn't go as well as it does in the simply grooved pan.

What a delightful looking cake! Thanks for the recipe recommendation too. A couple of years ago I splurged on some Nordicware bundt pans so now I feel like hauling them off the shelf and trying this poundcake.

Thanks for commenting, everyone!
April,
I purchased the pan from a local bakeware shop called Cookshop but Nordicware is available everywhere.
Cate,
Yeah, I admit it's a pain because of all the crevices, but I sprayed it well initially and the cake came out. Water pools in the crevices and I turn it to dry upside down or leave it in my (turned off) oven afterwards to dry out.
Mark,
No need for a glaze when you see how much sugar and butter went into this pound cake! yikes!

This cake looks heavenly! I love the pan, makes it look soo good! I cant wait to try this

Wow, nice pan...give the cake a very different look...yummie! The cake looks so tasty and moist. Love the pictures.

I have always wanted to get one of these fancy pans. Your cake is beautiful.

What an awesome pan! Is it nonstick? I imagine it has to be in order to get those intricate details out in one piece?

Marc,
oh yes, this is a non-stick pan, but I made sure things would release well by spraying it too! I wouldn't even want to tempt fate by not spraying...The cake releases very easily!

Great pattern on that cake!

I have always been tempted by these floral bunt pans. Your close ups are pushing me to buy one.

I enjoy a good pound cake but unless they're from scratch, are hard to find. This looks lovely and moist. Nicely done!

This is my first time to your blog - you've got some great recipes! I love this beautiful pound cake!

I LOVE pound cake and this one looks divine. On another note I have had problems with my blog moving my gadgets around but I just changed to Firefox (instead of Google Chrome) and everything now works fine...I don't know if that helps!

Patricia,
Thanks for the advice...but I have Firefox too and that doesn't seem to solve my issues with clicking and dragging things in my posts. I'm glad it worked out for you though!

I love the shapes of this cake!

Thanks for sharing this peach blueberry cake recipe... Will try this!!

As you wrote, this is a very interesting recipe for a pound cake. I haven't came across any recipe that asked to whip the heavy cream to soft peaks to incorporate into the batter! Yup....a definitely must try for me next time!

Thanks for posting and for sharing such a wonderful recipe!

Anonymous,
thanks for the comment! Yes, it's a neat cake to try! I thought it was very tasty indeed! I'll make it again for sure!