GIVE ME A (SPRING) BREAK CUPCAKE

As you can see from my lack of posts, prior to Spring Break I had huge stacks of marking to plough through. That coupled with the running nightly and I wasn't in any mood to bake. I just wanted to sleep.

Though night time isn't the ideal time to run because of the huge adrenalin rush prior to going to bed, I'm sufficiently exhausted from the day that when my head hits my ergonomically designed memory foam pillow, I'm out for the count! 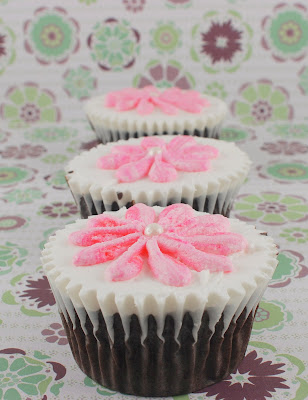 Not that I'm rationalizing eating a treat, but I've actually lost about 7 pounds just with the addition of all this running. It's not a lot of running, mind you. I can only afford 20 minutes a day, but I've been increasing my speed and I'll keep pushing myself by either doing that or increasing the incline on my treadmill.

With the running and the low-carb/refined foods restriction, I think I can allow myself a wee chocolate cupcake. I made a huge batch of tiny cupcakes and regular-sized cupcakes. Of course, I indulged in only one mini one :)

I brought the tray of cupcakes to school for my colleagues because I thought we needed a treat for the tough few weeks leading up to report cards. Heck, we sure deserved it. 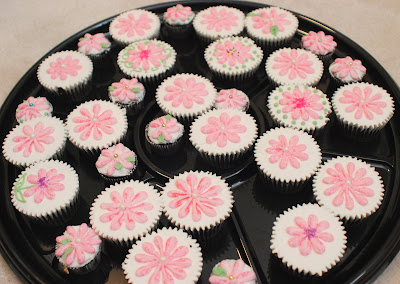 here's the tray of cupcakes: note the mini ones...they're only a mouthful; less than half the size of the regular-sized cupcakes 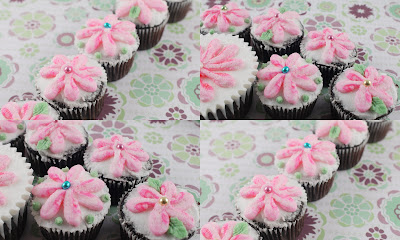 for pink gerberas, I used a 103 Wilton tip and plopped a dragee in the centre. 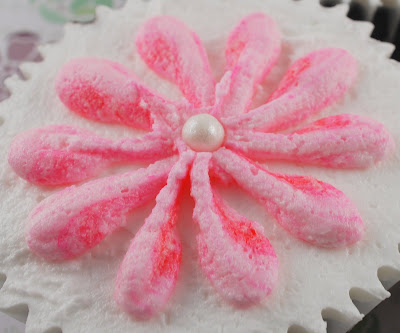 the buttercream frosting was tinted pink, but I intentionally didn't mix the colouring in thoroughly because I wanted a variegated look to the petals. 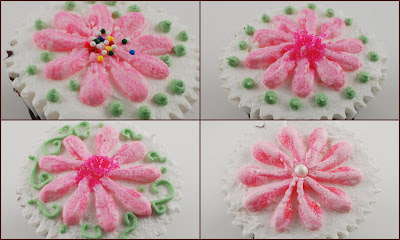 since I bake at night, I soon lost motivation to complete the decorations on the cupcakes and instead of finishing the gerberas with green leaves and vines, I decided to keep it simple ;P

The cupcake recipe I used was my favourite Barefoot Contessa chocolate layer cake recipe; but I adapted it for cupcakes instead. I reduced the baking time. Then I used the Wilton buttercream flavoured with almond extract. It's easy to pipe with and holds up well.

You definitely deserve a cupcake after your running and 5 lbs lost! These cupcakes are beautiful, and I'm sure your colleagues really appreciated them. Yay for spring break!

wow how cute even without the green decoration they re super nice :)

Lovely cupcakes. What a great burst of spring - we could definitely use it here!

Gorgeous! they are perfect for spring! :)

What beautiful cupcakes! Congrats on the weight loss :)

I don't believe it. Before I left for the States, I actually ran more than that each day and I didn't lose a single pound! My spirit is broken! Cos that's exactly how much weight I wanna lose :P Looks like such pretty treats are yet to be actually deserved by me, heh :)

Those cupcakes look really good! I like the mini ones.

The cupcakes are adorable. I love the spring flowers, well done!

Your cupcakes are very beautiful.

Elyse,
My colleagues appreciate all things free! they polished off the cupcakes!
Snooky Doodle,
Now I have all this green frosting to contend with! :p
Sweet Kitchen,
Well, it sure isn't spring in Vancouver yet! no flowers :(
Ginny,
thanks!
Sara,
thanks, it's a tough thing to keep up but I'm going to keep it up as long as I can!
Mark,
You actually think you need to lose 7 pounds? I think those chocolate domes you're eating might be the culprit if you're indeed running that much! :)
Kevin,
the mini ones rock. the proportion of icing to cake is higher!
Maria,
thanks! hope you have flowers where you are!
Ivy,
thanks for visiting! happy spring!

I just came over from Snooky Doodle. I LOVE your pink flowers... One question... Was that white buttercream underneath or was it an icing glaze? I am wondering how you got the white soooooo perfectly onto the top of the cupcake (if you look at the paper fillers, you see how perfect of a job you did!)
Brava!! Leesa
P.S. I'm at http://www.cupcakeprincesse.com
(my cupcake site)


We bumped into your blog and we really liked it - great recipes YUM!!! YUM!!!.
We would like to add it to the Petitchef.com.

I admire your patience to do this much when you just want to hit that pillow. They look fantastic.

Leesa,
Well, the Wilton recipe turns out a fantastically white buttercream and the secret is to beat the heck out of it in the stand mixer (about 8-9 minutes) so that it's creamy smooth. If you use an offset spatula things are easier I find. I use a mini spatula for cupcakes. Make sure you only fill your cupcake liners half-way so that they don't dome past the top of the liner when baked. Then all you do is plop a dollop of buttercream on top and use the spatula to spread the buttercream. Use the tops of the liners as a guide and it'll be smooth.

Vincent,
Gee willikers, thanks a bunch for the compliment! I'm honoured you thought my blog interesting enough to join!

Giz,
My patience wears thin sometimes, I must admit! I must keep working out...otherwise no desserts allowed!

Thanks so much for the tip and thanks for visiting my blog and leaving a comment! I will try your suggestion! Take care, Leesa

Congrats on the weight loss! I especially love those mini cupcakes. Portion control, like you said! ;)

Beautiful cupcakes! You are very talented.

I love the pretty pink flowers, I am going to have to try that.

I love the pretty pink flowers! You sure deserve a cupcake break! Well done, with all the running!