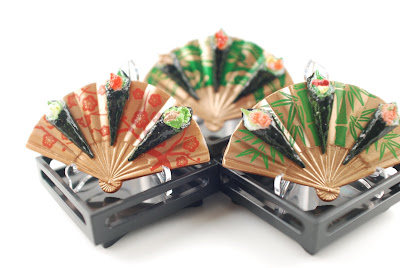 miniature sushi cones: so realistic you want to pop them in your mouth!

Here's some teeny tiny sushi cones for Bebe's dollhouse. The dolls are "Asian"--well, at least the PLAN toy company thinks they look Asian ( I personally think their hair-styles suck!)--and they have been hankering for some sushi...so along with their Pierre Herme Desserts, they're having some appetizing sushi. 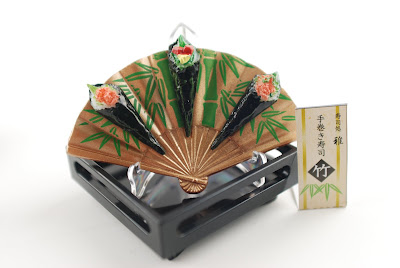 I don't read Japanese so I have no idea what some of the fillings are inside the cones, but from the looks of some, there are fish eggs, fish, veggies, tamago and other such usual goodies. All I can tell is that one has a bamboo theme; another a flower blossom theme (spring?) and from my crappy understanding of asian characters, the other one has something to do with trees (a summer theme?) 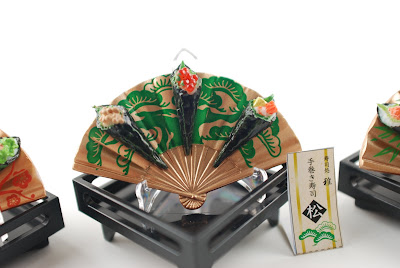 This sushi set was one of those "surprise" sets. The salesgirl told me she couldn't guarantee which set I would get inside the box. There was one set with nigiri sushi, another had crab and another had rolls. I actually wanted the set pictured on the box (the nigiri sushi on the wooden tray) but I guess I'm not wholly disappointed with this set. They're quite cute. The sushi set was much cheaper than the Pierre Herme box I bought. This one clocked in at $8.49 CDN 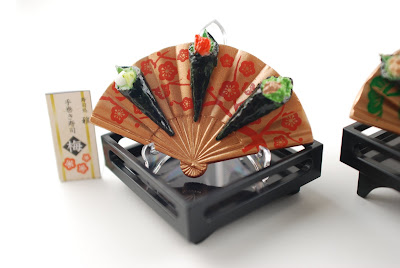 For that price, I could have gotten 3 real-sized, edible sushi cones at my local Japanese restaurant. Ah well, like I said: the dolls have to eat! And BTW, I didn't buy anymore fake food nor do I intend to buy more fake food because now the dollhouse larder is full. They've got hand-made (by me!) FIMO fruits, veggies, hot dogs and burgers along with a fridge full of beverages. I just needed to make sure they had sushi and dessert. I mean, that's all one really needs to eat well in my books. 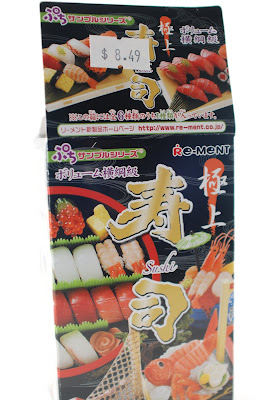 Very cute! I'm glad the dolls have sushi now, how could they have survived this long without it?

TeMaki (hand roll sushi) is one of my favs!

OMG these are so cute! I have a mini 2 tier plate of cakes and cookies..with a strawberry teapot and cups.. and I also have mini mini buns in a basket.. It's soo cute!

Makes me wish I'd had a girl so I'd have an excuse to buy dollhouse sushi. These are adorable!

Re-ment products are popular among Japanese collectors. The company sells all types for miniture stuffs including all major sushi, rolls and temaki. Plum, bambo and pine together are the symbol of good fortune. My wife bought several Re-ment brand doll house kitchens when we took a trip to Japan last time.