CINNAMON BUN STYLES: THEY'RE ALL GOOD 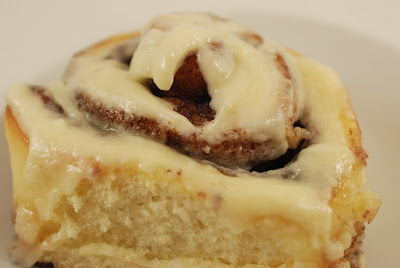 I have a 15 year old Black and Decker bread machine stashed away in my cupboard.

You didn't know Black and Decker made bread machines, didja? (no, I didn't buy it at Home Depot!) I have gotten some good use out of my machine and it's still chugging along no problems...knock-on-wood! Though it's an ugly beast it does the job. It doesn't have a little glass window so you can watch the bread mix, rise and bake. I just lift the lid and take a peek. What I discovered is that it's perfect for making really wet and sticky doughs. I just use the "dough" setting and when it's ready I do the rest by hand. I've made foccaccia, brioche and of course cinnamon buns with this great dough setting.

I was flipping through my collection of cinnamon bun recipes and I came across a couple of favourites...

In Vancouver, we have an institution that makes the best Cinnamon Buns ever. They're unique and you have to be a starving university student to understand the cult-like following that these buns have. In fact, you have to be on campus to purchase these buns. The University of British Columbia has the best caramelized cinnamon buns out there. There's no stupid raisins sticking out of the dough. There's no nuts and there's no cream cheese frosting. The texture is lighter and they're not as rich as the ones you buy at the mall. But these suckers are HUGE. Each bun is about 3 inches tall and the size of a side plate. The centres are of course the best with all their sticky gooeyness.

When I was attending UBC, I'd buy one and it would sustain me the whole day. Not a very balanced diet, but this wasn't what I did every day. I acquired the UBC Cinnamon Bun recipe from the local newspaper, The Vancouver Sun, and made them many times. The last time I made it, as I was pulling the roasting pan out of the oven, (yes, they're so huge you need a roasting pan for them) the pan touched my inner forearm and I had the nastiest burn ever. I haven't really made them since.

However, if you're a daredevil and think you could eat the whole batch, I'll include the recipe for UBC Cinnamon buns in this post. It's a traditional recipe, made by hand, and yields enough buns to feed a small country or your kids' soccer team. Just scroll to the bottom.

The next best thing to UBC Cinnamon buns are those that you get slathered with cream cheese frosting. There are different chains producing them in the food courts in malls and some bakeries and coffee shops carry them too. 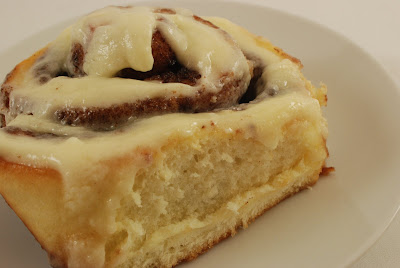 I have a quick and easy Bread Machine Cream Cheese Frosting slathered Sin-Amen (hey, I coined an oxymoron!) Bun recipe.

The dough is all mixed in your Bread Machine according to manufacturer's instructions...on just the dough cycle. You take out the dough, roll it out and fill it and then roll it up like a jellyroll. You don't even have to wait for a second rise. You just pop it in the hot oven and by the time you finish creaming together the frosting, the buns are ready! 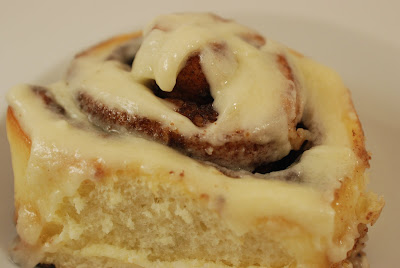 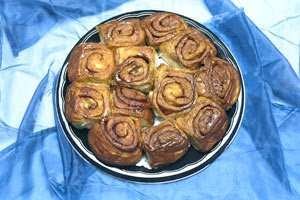 Now, what some of you UBC alumni may have been looking for high and low. These are the legendary, gargantuan

(as published in the Vancouver Sun)

Those are lovely! And the second recipe has as much calories as a Big Mac, haha!! I wonder how much more it would carry if it were frosted with cream cheese ;) Really decadent! I hope you shared them, lol :)

Those cinnamon buns look so good! I have only tried one cinnamon bun recipe. It sounds like I am going to have to start making some different ones to compare them. :)

These look so tasty! I can see why they would last you all day at school. Ahh the starving student days :(....

If you want an honest comment you have to send me a bunch right away so i can taste them. haha. I will give you feedback within a day of stuffing myself. :-)
They really look delicious!

Ok, first time on your blog and I already gained 3 lbs just looking at the cinnamon buns. I have to resist jumping through my monitor.

Wow, these look gooey and great!

They look so tender!
And I had no idea about Black and Decker + bread machines either. :)

You're right, they ALL look so good. There's nothing like walking into a mall and getting a good whiff of CINN-A-BONS ;-)

oh my gooooood! don't do this to me! Now im craving cinnamon rolls at midnight BIG TIME!

cinnamon buns!! *drool* these are so yummilicious looking!

I tried the bread maker recipe, and after the dough cycle, it presented me with batter instead of dough. I had to work in a 5th cup of flour to get workable dough. They turned out well though!

LOL,
Geez, a batter? that's too bad! I've made this recipe dozens of times (not consecutively!) and haven't had a batter. The dough is extremely sticky, but that's the idea so it stays ooey gooey moist after you bake it! I don't use extra flour because I work everything between sheets of plastic wrap so nothing sticks! I wonder if there's a difference between flours that would create that situation? Glad the extra flour make it okay!

Cinnamon buns are the way to true bliss. My grandmother, "Grace Hasz" was the baker who first started making the UBC Cinnamon Buns. I've been trying to recreate her recipe as the one UBC posted is not what she baked. I've also written a little bit about her and the cinnamon buns http://ubccinnamonbun.blogspot.com/2011_10_01_archive.html.