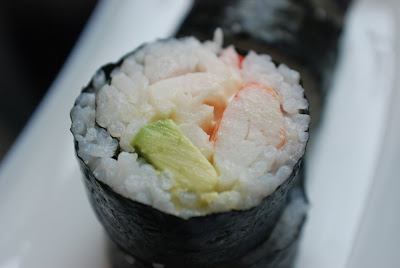 Have you ever had a craving for sushi? 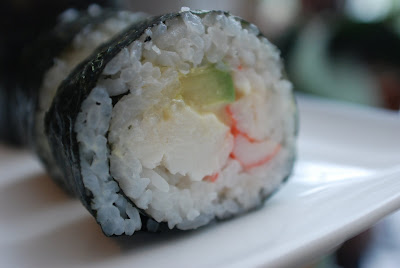 I was at the local market handling a perfectly ripe avocado when the craving hit. I immediately added the avocado to my basket along with some of that fake crabmeat (surimi) made out of pollock. A fish with such an unappealing name surely needs to be processed into something else.

I had a 5-sheet package of "fancy" grade sushi seaweed in my cupboard at home, some Kokuho Rose brand sushi rice, a bottle of seasoned rice vinegar, and that weird Japanese mayonnaise in a squeeze bottle (Kewpie mayonnaise). Those are the makings for California Rolls!
Here's my recipe--actually I don't really use a recipe, I just kind of wing it, but this time I measured for your sake! 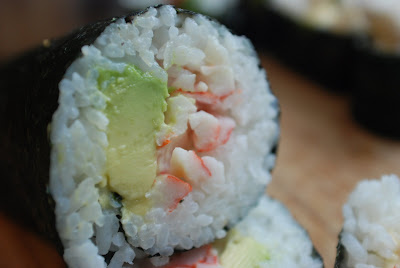 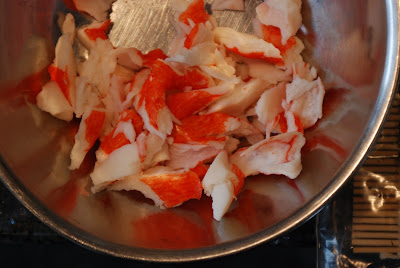 This is surimi. I know it's fake, but it's delicious!
You can substitute real crab meat if you're made of money. But if I were you, I'd rather splurge on the seaweed. 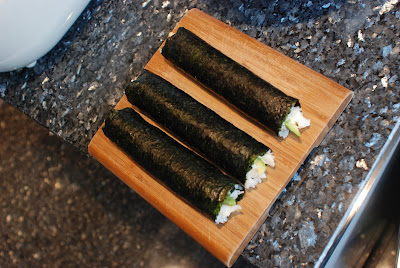 Wow! I love California rolls. Here in the Philippines, though, we invariably prepare it with sweet, ripe mango instead of avocado. I've had it both ways and I prefer the mango version, but Filipinos are not known to like avocado in entrees :)
I love both real and fake crabmeat-- both great ingredients in their own right.

That home made sushi looks really good. I am now craving sushi...

i allllways crave sushi. sometimes I do temaki hand roll parties at my home - just lay out all hte diff ingredients and everyone just makes their own handrolls

These are food-porn-worthy pictures! I am craving some sushi too, as soon as I finish the rest of this easter candy! :-)

Nice pictures! I'm not a huge fan of seaweed, but the filling sounds like a great combo.