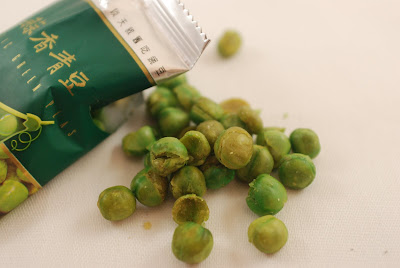 I have a shameless addiction to sodium-laden junk food. If there were some sort of Junk Foods anonymous group, I'd have to join it. Lately, I've discovered Asian junk food at T & T, an asian supermarket chain in Vancouver which carries a myriad of Asian foods. Sometimes I find weird and funky things. Often I discover totally delicious stuff.

My snack pantry currently has favourite snacks that proclaim some sort of "health benefit" to them. Yeah, I know. Who am I kidding? Well, I'm still trying to lose those last few stubborn pounds of baby weight so I can fit into my skinny jeans again. I recently decided to go low carb as much as possible. It'll be fun to pack my low carb bento lunches for work, but sometimes it's difficult around 4pm and I've got the munchies.

Garlic Green Peas are individually packaged and handy when I need something savoury and crunchy. The ingredients are green peas, vegetable oil, garlic, sugar, salt, and garlic powder. They're made in Taiwan by this company called Global-Mart Food; Triko Foods Co. I can't read Chinese so I can't tell you what it says on the package or what their brand name is. Sorry!

I think the fact that they are portioned in these itty bitty packages helps--as long as I remember not to have more than one little package! Since the buggers are kind of difficult to rip open, that's good too for portion control. The Garlic Green Peas beat Wasabi peas in my opinion because I'm not too fond of wasabi. They would go great with a nice cold beer I imagine; yet I don't really like drinking beer... but for some reason I yearn for a beer when I'm eating these peas! On the bag, there's this bottle of sake in the background. You get the idea.
* * * 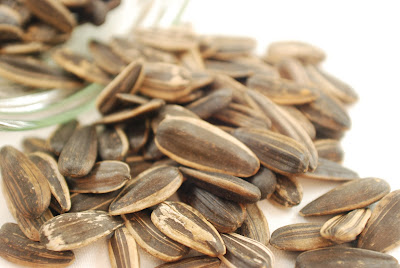 Another totally unexpectedly delicious Asian snack surprise came when I decided to try Coconut Flavoured roasted Sunflower seeds. I'm generally not a sunflower seed-eater and often find the way people spit the shells out kind of disgusting. However, I suspended my elitist views to give this interesting snack a try. It was SO good I couldn't believe it. 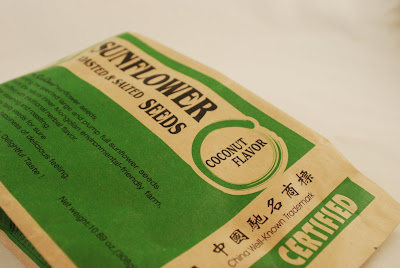 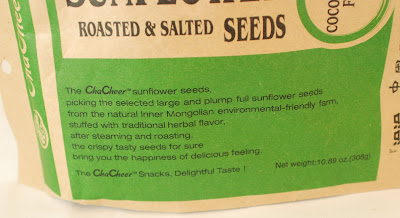 isn't the "engrish" translation cute? nice try. it's kind of poetic i suppose

I have since developed a sunflower seed cracking technique that obviates spitting. I crack the shells with my front teeth and pull out the seed with the fingers of my other hand before popping them in my mouth. My mother does this one-handed-crack-the-seed-with-your-teeth-use-your-tongue-to-dislodge-the-seed-and-eat-it-all-at-once technique which amazes me. She goes through about 2 to 3 seeds for every one seed I eat. She laughs and pokes fun at my obsessive-compulsive way of eating the seeds but when she hits the occasional rotten seed she pays for it! Taking it all in stride she says it's okay and it's not going to kill her. The Chinese manufacturer was even kind enough to include instructions for eating the seeds, "crack the shell with your teeth, eat the seed and spit the shell. Be cautious don't eat the seed without spitting the shell!" I just love it. har har! 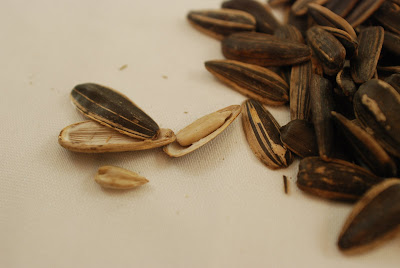 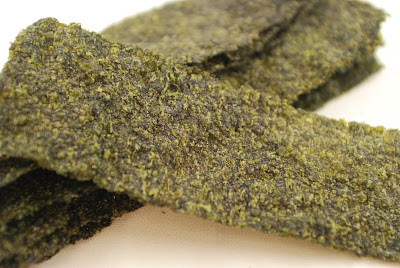 My favourite snack that has replaced potato chips, is Japanese Crispy Seaweed. Yes, I initially thought it would be like eating roasted Nori for sushi, the little packages of teriyaki-flavoured strips of seaweed or even the Korean flavoured seaweed. No way! This stuff is crispy and light and seasoned just right! I like to buy the Seafood flavour because the package purports to contain Omega-3, DHA and EPA. The other flavours don't have that claim. The spicy flavour is pretty good but I haven't tried their wasabi flavour. The tomato flavoured one is just too weird a combination. 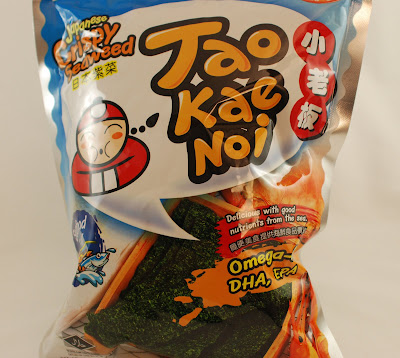 Thankfully, there's some translation on the package: it's called Tao Kae Noi Crispy Seaweed. The ingredients are simply seaweed, oil, seafood flavour and salt. On the back of the package are the numbers for its fatty acid composition. It's produced and distributed by Taokaenoi Food and Marketing Co. in Thailand. 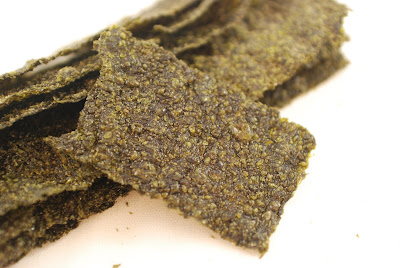 this is the unseasoned side. it's a little bubbly looking. these seaweed snacks are not oily (unlike Korean seaweed snacks), but dry and crisp.

Okay, I kid you not about this little anecdote. Last year, over the course of the summer I had ingested quite a few packages of these sunflower seeds (good thing they're cheap!) and even more of the crispy seaweed (not so cheap!). My hairstylist noticed my hair was particularly strong, soft and silky. He said, "oh my goodness!" and pulled out a really weird hair. It was black at the root for about an inch and a half and then grey to the end. He carefully set the strand of hair aside so he could show his colleagues later because he had never seen someone in his whole career as a stylist (more than 30 years!) with even one hair that had done that before. It was a grey hair that had reverted back to its original colour! Cool, eh? Unfortunately, I only had one strand of hair do that. Those sunflower seeds were the only thing I changed about my diet at the time, so I'd like to think they had a hand in reclaiming my hair colour. I don't have a lot of grey to begin with, but it's kind of neat to think eating sunflower seeds and omega 3 rich foods will bring back youthful-looking hair!
Pin It
Posted by Cakebrain at 19:57

I think we have that same brand of sunflower seeds here! Anyway, here in the Philippines, we don't eat the thing whole and spit out the seed, we crack the shell with our teeth and either clamp down on the seed with out teeth and pull out the coat, or pick out the seed with our fingers. Just be careful not to crack your teeth!

i eat sunflower seeds the same way you do thanks to a bad experience as a child. i was eating them in the break open, pull out seed, spit shell way, and i got one that was all these different pieces so i spit it out and there was a little mealworm inside!!!! i was scarred for a LONG time and only recently started eating sunflower seeds again.

The same thing happened to me when I was eating currents off my grandmothers bush in her backyard. I was about to eat one and a little white worm crawled out of it...ewww! anyway I just wanted to comment on the gray hair thing. Premature gray runs in my family and my hair started turning gray when I was in my teens and now I am pretty much all gray. (I am 41 now.) So because people told me I should, I colored it for many years, and then the cancer scares started to get to me so I stopped using hair dyes 2 years ago and let the gray grow in, and boy do I get lots of compliments on my gray colour! (suprise!) I wish I had never coloured it to begin with. I think gray hair is coming into style for women, finally!! Kelly from Canada.

Its the sea weed, it has all the minerals needed for body.... Thats why japanese/ koreans have amazing hair....

I think the brand of the garlic green peas is "Ego". It's manufactured by a Singapore based company:
http://www.keewee.com.my/products.aspx?cat=snack
It's also my fav snack. But i can't find it in Manila, only Singapore! :(

i'm from the caribbean & IDK where my Mother in law got these peas from but I lov them, the little package is so cute...In my country we deep fry Channa or chick pea to and season with salt and garlic also but that's not to healthy:(